GAITHERSBURG – When it is all said and done, Quince Orchard High School running back Marquez Cooper will leave the program as the Cougars’ all-time leading rusher, but that does not mean he is finished adding to his historic numbers.

To get an idea of just how impressive the senior tailback’s been, Cooper’s five rushing touchdowns in a 62-14 win against Richard Montgomery High School on Oct. 11 were not even the most he has scored in a game.

The Cougars started the game in somewhat shaky fashion, surrendering an early touchdown to Richard Montgomery and trailing, 7-0, in the first quarter. But they quickly turned things around, starting with a long kick return for a touchdown by senior defensive back Charles Bell IV, then a fumble recovery on the ensuing kickoff at midfield to set them up for their second drive of the game.

From that point on, the floodgates opened; following a fourth down conversion by receiver Ryan Swigart, Cooper would score his first touchdown of the day, five plays later, from 2 yards out to begin the second quarter, followed by a second score to extend the Quince Orchard lead to 21-7.

While he did most of his damage on the ground, Cooper also displayed his pass-catching ability with a 35-yard catch-and-run that set Quince Orchard up at the Rockets goal-line late in the half. He finished off the drive to take a 28-7 lead into halftime. Quince Orchard would score again on their opening drive of the second half, making that 35 unanswered points.

“He’s one of the best players in the state (of Maryland),” Quince Orchard Head Coach John Kelley said of his senior tailback. “It’s not surprising, and this is probably the first full game he’s played; our starters have only played two full games so far.”

Despite their dominant performance, however, the team was not ready to sing their own praises just yet.

“I underestimated their offense a little bit,” said junior Jeremiah White, who played on both sides of the ball. “I felt like I was a little unprepared.”

“We don’t see that much adversity during the year; with most teams, we just dominate,” Cooper said. “We needed to be down 7-0; we needed that adversity to take with us into the playoffs for when we play teams like Northwest and Wise (High School).”

While the scoreboard may not have shown it, Quince Orchard did make their share of mistakes. They struggled to protect their quarterback, Brian Plummer, who was sacked multiple times, and Cooper did fumble and turn over the football early in the second quarter.

The defense in particular played really well, but they also committed multiple offsides penalties, and they gave up a 36-yard passing touchdown in the third quarter, which temporarily cut the Cougars’ lead to 35-14.

In spite of their fight, Richard Montgomery’s defense had absolutely no answer for the rushing attack of Cooper, who would score his final touchdown late in the third quarter to essentially erase any hopes of a Rockets turnaround and extend the lead to 42-14.

As for the rest of the offense, other players like Swigart and fullback Ryan Jones made key receptions in the passing game, and on defense, defensive backs Toddreis Baltimore and Ryan Barnes each scored returns on special teams and defense, which opened up the game even more.

“It’s a team effort out here; everybody gets some love,” Cooper said. “I like to see other people’s success too.”

“We’ve definitely had some guys get better as the year’s gone on,” Kelley said. “But I think these guys can still continue to improve in a lot of areas, too.”

Quince Orchard remains undefeated at 6-0 following another blowout performance. They will look to continue their positive momentum when they take on Walt Whitman on Oct. 18.

Meanwhile, Richard Montgomery falls to 4-2. The Rockets will host Wootton, who have yet to win a game this season, on Oct. 18. 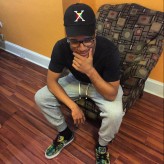