COLLEGE PARK – It was a day of firsts for the University of Maryland football team as it faced Howard on Aug. 31. However, it was more than just Mike Locksley’s first win as the Terps head coach.

Quarterback Josh Jackson threw for his first touchdown in a Maryland uniform less than four minutes into the first quarter, and then added three more. Four Maryland players scored their first career touchdowns, and DJ Turner (DeMatha Catholic High School) had the program’s first punt return touchdown since 2016. Each of Maryland’s eight sacks was the player’s first as a Terp.

All those firsts added up to absolute domination in a 79-0 win over the Bison. It was the most points Maryland scored since putting up 80 against Washington College in 1927.

“We talked about as a program, we only get one opportunity to make a great first impression,” Locksley said. “Our guys I thought collectively, offensively, defensively and on special teams, all contributed to the win.”

Maryland easily overpowered Howard in all facets of the game, leading 56-0 at halftime. Howard did not get a first down without the help of a penalty until the third quarter. The Terps finished the game with 623 total yards, scoring more points (79) than plays run (78).

“(Newton) and his ability to make plays on the perimeter, that really concerned us coming into the game,” Locksley said. “We did a good job with our defensive end and outside (line)backers of really keeping him in the pocket.”

Meanwhile, Jackson had some early game jitters but got better as the game went on. He started 3 for 8, which included finding Dontay Demus Jr. (DeMatha) on a slant that the sophomore wide receiver caught, shrugged off his defender and scampered for a 26-yard touchdown.

That opened the floodgates. Both teams traded punts before Maryland got prime field position once again. Punter Isaiah Moore fumbled the snap on a Bison punt, and freshman Nick Cross (DeMatha) tackled him at the 13-yard line. Following a defensive pass interference call that set the Terps up at the 2-yard line, running back Anthony McFarland (DeMatha) punched it in to give Maryland a 14-0 lead.

Jackson put the Terps in the red zone with a 39-yard completion to Brian Cobbs on their next drive, which ended as Chigoziem Okonkwo caught a drag route for a 4-yard touchdown. Jackson threw another long pass, hitting Darryl Jones in stride for a 49-yard gain. One play later, McFarland ran it in from 6 yards out for Maryland’s final touchdown of the first quarter.

The Terps led 28-0 after 15 minutes, the most points they have scored in the opening frame since Oct. 5, 2002. Jackson threw for two more touchdowns in the second quarter with each score becoming the first for the Maryland receiver. He found Sean Nelson on a 6-yard drag route for an easy score and on Maryland’s final drive of the half, found Buffalo graduate transfer Tyler Mabry wide open for a 24-yard touchdown.

Jackson finished 15 of 24 with 245 yards and four touchdowns in his Maryland debut.

“The first drive, I got a little greedy and tried to take DJ (Turner) on a 3rd and 5 when I should have got to my progressions,” Jackson said. “So that killed that drive. After that, we produced. I think after that first drive, things got a lot better.”

With Jackson sitting in the second half, Tyrell Pigrome, Tyler DeSue and Lance LeGendre each saw time under center. Pigrome also played two series in the first half, throwing a deep pass to Demus along the left sideline for a 62-yard touchdown. He also picked up a bad snap and ran for a 22-yard touchdown in the third quarter.

DeSue added a touchdown of his own from 5 yards out in the fourth. LeGendre ran one series that ended with Jake Funk (Damascus) being stuffed on fourth down, finishing the game one point short of the program record.

Maryland will have a steep jump in competition next week when it takes on No. 22 Syracuse. The Orange went 10-3 last year, their best season since 2001.

“What I hope as a team is usually as a team you make the biggest jump from week one to week two,” Locksley said. “We’ll watch the tape and try to get the things corrected that need to be corrected.” 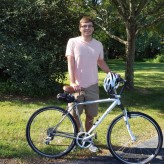