OLNEY – Our Lady of Good Counsel High School and Paul VI Catholic High School battled on the baseball diamond on April 20 but it would be the Panthers who left victorious with a 14-3 rout after a five-inning outing.

It was a relatively quick first inning as neither team accumulated much offense besides a double from Paul VI freshman Aiden McDonald and a pair of singles from Falcons outfielder Jack Taylor and catcher Sean Ghion.

However, the Panthers ended the first inning in spectacular fashion as left fielder Bradley Gagan caught a fly ball and was able to throw out Taylor at home plate to keep the game scoreless.

At the top of the second inning, senior Nicholas Ortega hit an RBI double, sending senior Richard Smiechowski and freshman Bryce Dolby straight home. Pitcher Jack Sandridge already went through the lineup once as McDonald stepped up for his second at-bat.

The freshman hit a double and drove two more runs in to expand the lead by four. The Panthers proceeded to score 10 runs to end the second inning.

The Falcons shot themselves in the foot during the onslaught when Taylor committed an error trying to field a Dolby line drive to center field. The mistake allowed three more players to score.

Good Counsel Head Coach Tim Parks went to his bullpen to relieve Sandridge for senior Chris Hauser, who pitched three and 1/3 innings. Hauser gave up five hits and four runs in his appearance, but also struck out three batters.

The Falcons finally got on the board at the bottom of the fifth inning when senior Paul Kuhns hit an RBI single and sophomore Drew Durrington capitalized. After a wild pitch, infielder Kenny Baer stole home to add another score for the Falcons. Outfielder Chad Frick connected with an RBI double, sending Kuhns home. That was as much damage the Falcons could inflict as Good Counsel still had a nine-point deficit to overcome.

PVI scored twice more after senior James Clark and senior Devon Zavacky rounded the bases to make it 14-3 in the fifth inning. Ortega threw seven strikeouts, walked one and allowed three runs in four innings for the win.

The game ended with Falcons accumulating eight hits. Taylor and Ghion were the only Good Counsel players to have multiple hits in the game. 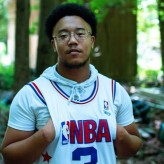